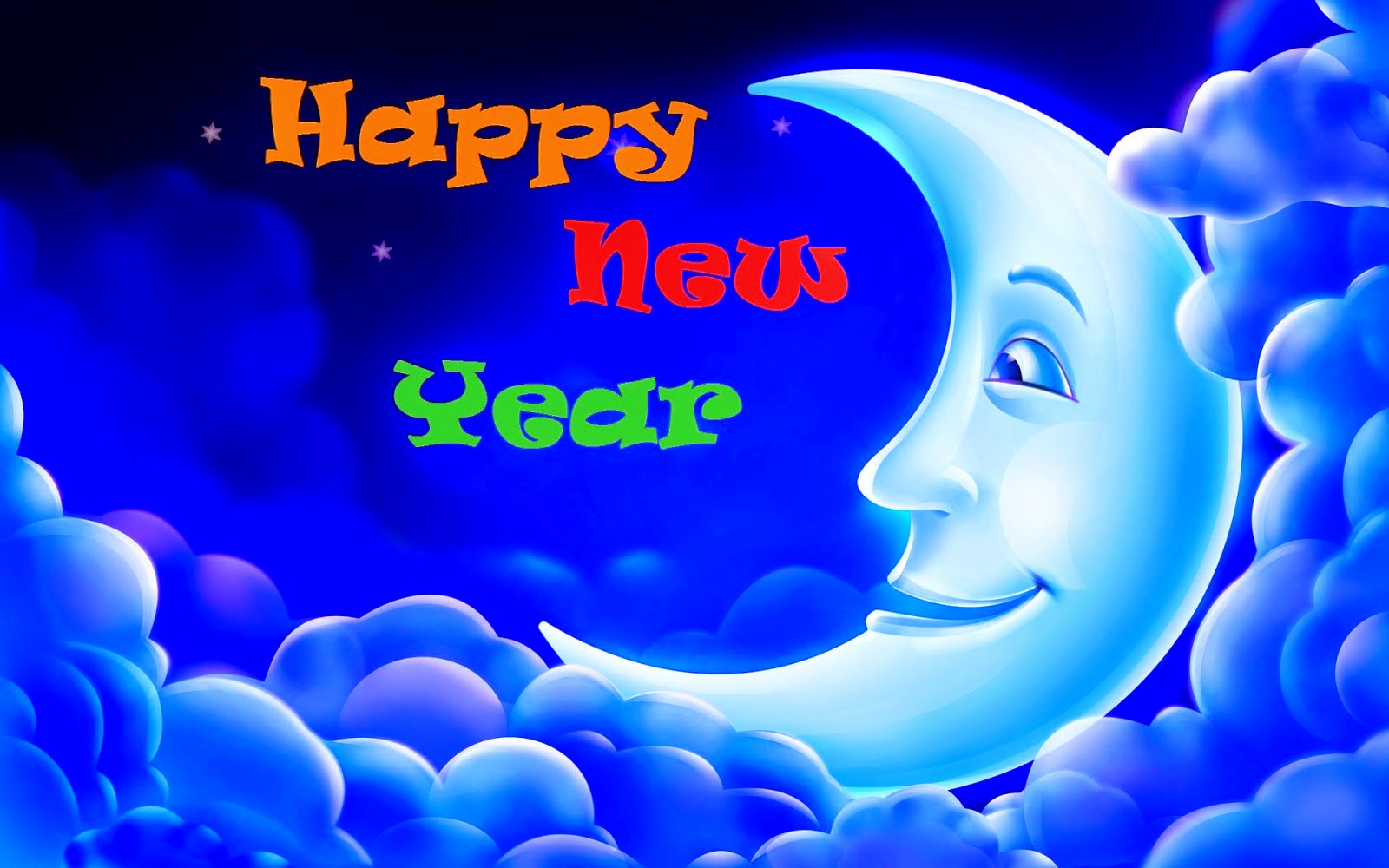 Post offices moved a step closer to becoming banks. The government has allowed certain eligible branches to issue ATM cards to their account holders and also account statements instead of giving out passbooks, as most private sector banks do.

On Tuesday, the government issued a gazette notification amending the Post Office Savings Bank General Rules, 1981. The rules will come into force immediately. These facilities will be available to the branches that are working on core banking solution software, essentially branches that part of an electronic network.

The funds raised by them largely go to finance central and state governments. India post currently has about 1.55 lakh branches, nearly 90% are in the rural areas, which many experts see as a good vehicle for financial inclusion. The notification says the post office savings bank could issue automated teller machine or debit card to account holders on request or otherwise which can be used to withdraw funds from any of the branches having core banking.

The deposits to these accounts could be made and accepted through any electronic mode. The RBI had decided against issuing a banking licence to India Post when it gave out licence to IDFC and Bandhan Financial Services saying it would decide after consultation with government. The new rules notified by the government will push India Post closer to banks.

Conducting of Limited Departmental Competitive Examination for Promotion of to the cadre of Inspector Posts (66.66%) Departmental quota for the year 2014 held on 22nd and 23rd November 2014 - Display of Provisional Key 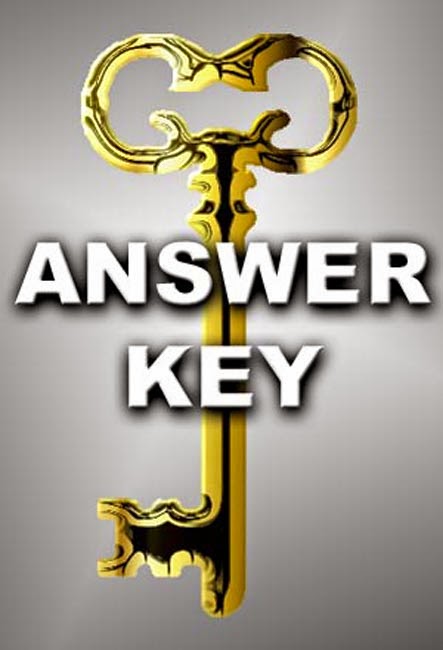 Quote of the Day December 30

Clarification regarding issue of medicines under CGHS

No. 2-2/2014/CGHS(HQ)/PPTY / CGHS(P)
Government of India
Ministry of Health & Family Welfare
Department of Health & Family Welfare
Nirman Bhawan, Maulana Azad Road
New Delhi 110 108
Dated: the 23rd December, 2014
OFFICE MEMORANDUM
With reference to the above mentioned subject the undersigned is directed to state that the situation arising out of issue of Office Memorandum No 2/2014/CGHS(HQ)/PPTY / CGHS(P) dated the 25th August ,2014 has been engaging the attention of Government for quite some time. Various representations about the difficulties being encountered have been received from different stakeholders i.e., beneficiaries and doctors, necessitating a review of the matter. It was accordingly considered by a Committee under the Chairmanship of AS&DG,CGHS. After careful review and keeping the recommendations of the Committee in mind, the following guidelines are issued to streamline the functioning of the Wellness Centres:
i. The medicines are to be issued as per the CGHS Formulary and guidelines issued by this Ministry in this behalf.
ii. In case the prescribed medicines are not available in CGHS formulary, but are essential for the treatment of the patient, they can be issued / indented by the doctors of the CGHS Wellness Centre on the basis of a valid prescription of the authorized specialist subject to the condition that such medicines are neither dietary supplements/ food items nor banned drugs. Instructions on this issue i.e., non-admissibility of food items etc. issued vide O.M .No. 39-3/2003-04/CGHS/MSD/RS dated 23rd July 2009 and 3rd August 2009 must be followed.
iii. In case of anti-cancer drugs and other life-saving drugs that are not approved by the DCG1 for use in India, each case should be considered by the Expert Committee under the Chairmanship of Special DG(DGHS).
iv. The technical Standing Committee constituted vide 2-2/2014/CGHS(HQ)/PPTY / CGHS(P) dated 27.08.2014 of this Ministry will review addition or deletion of drugs in the CGHS Formulary/ list of Treatment procedures / investigations / listed implants. The Technical Committee will meet once in three months or as per need, whichever is earlier. In the meantime reimbursement for unlisted procedures / implants will be made at the rates approved by AIIMS/GB Pant Hospital / actuals, whichever is less.
2. The O.M. of even number dated 25.08.2014 is superseded to the above extent while O.M. of even number dated 1.10.2014 is withdrawn.
Sd/-
(Bindu Tiwari)
Director, CGHS(P)
(Tel 2306 1831)
Posted by gudurpost ************ at 10:46 PM 0 comments

(CNN) -- Most Indian cities are busy with cluttered streets, winding and hidden alleyways -- every postman's nightmare. Informal structures stand side by side with formal ones making navigation challenging -- even for locals -- and these cities are only going to keep sprawling, fast. By some estimates, the country's urban population alone will surpass 500-million by 2030: almost double the entire population of the US.
Zippr's Aditya Vuchi hopes to fix the broken postal format in India's exploding economy.
CNN: Why do you think India needs a service like Zippr?
Aditya Vuchi: Newer localities, newer cities are now coming up much faster than even the postal department is able to keep up with. As a result, large parts of India today don't have structured addresses.
CNN: There are often no building numbers or street names. How will Zippr tackle this?
AV: It solves the problem of explaining your address in a complicated way. We have mobile applications -- Android and IOS -- as well as on the web, where you go on to the app. Point on your map where your home or office is, give all your address information one time including landmarks, and the system generates a Zippr code.
That short 8-character unique code can then be shared with others, taking users to an exact location on Google Maps with directions.
CNN: More than 80 per cent of India's population still lives in an offline world of SMS messages and phone calls. How will Zippr reach these potential customers?
AV: Going forward, we're going to enable finding out an address via SMS channels where you text a Zippr code to a number and get an automatic response back with the full address, as well as directions to get there.
CNN: How many people do you think the service has the scope to reach?
AV: The vision that we are chasing at Zippr is to impact a billion lives. We feel that we have a serious shot at making lives so much better in India.
Source : http://edition.cnn.com/2014/12/29/business/zippr-india-smart-business
Posted by gudurpost ************ at 10:45 PM 0 comments

'Technology to be used to provide quick postal services'

Launching a smart phone-based Andriod solution to monitor letter box  clearance at the Lawson's Bay Colony post office here today, he said that the  facility is now functioning at Hyderabad and Vijayawada.

The facility will enable people and the postal department to know the status of  letter box clearance and its dispatch to customers through a a smartphone which  would be given to postal clearance personnel who clear post boxes.

He  said that 700 post boxes are being monitored using the solution, which would be  extended to more than 500 post boxes in Visakhapatnam in a phased manner by  February 2015.
He said that the Andhra Pradesh circle has decided to sell Tirumala Darshan  tickets of Rs 50 and Rs 300 denomination through all 95 head post offices in  Andhra Pradesh and Telangana region from January 5, 2015. The facility would be  extended all sub-post offices in the circle from February 2015, he said.

He said that the postal department had already begun selling non-judicial stamps  through post offices in the Telangana region.

Cashless transactions  would be introduced in post offices in the rural areas, he said.

He  said that payments for registered post, parcels and other services would be  accepted debit and credit cards by installing swiping machines at post offices.


In rural areas where there is no banking facility, the postal department would  allow customers to draw upto Rs 1,000 from post offices.

PREPARE FOR INDEFINITE POSTAL STRIKE FROM 2015 MAY 6TH.

SEPERATE COMMITTEE (WHETHER JUDICIAL OR BUREAUCRATIC)
IS A WASTE AND FARCE.

(NB:  Shri.Mahadevaiah has published in December 2014 a circular in his website in which again he has used filthy and unparliamentary language against the NFPE leadership.  He has called the leadership of NFPE as “Cowards” “impotent” and “liars”.  NFPE & AIPEU-GDS (NFPE) don’t want to stoop to the level of Shri. Mahadevaiah by replying him using such indecent and low-level third-rate language in our writeups).
Posted by gudurpost ************ at 10:40 PM 0 comments

Save paper: Officials asked to write notes on both sides 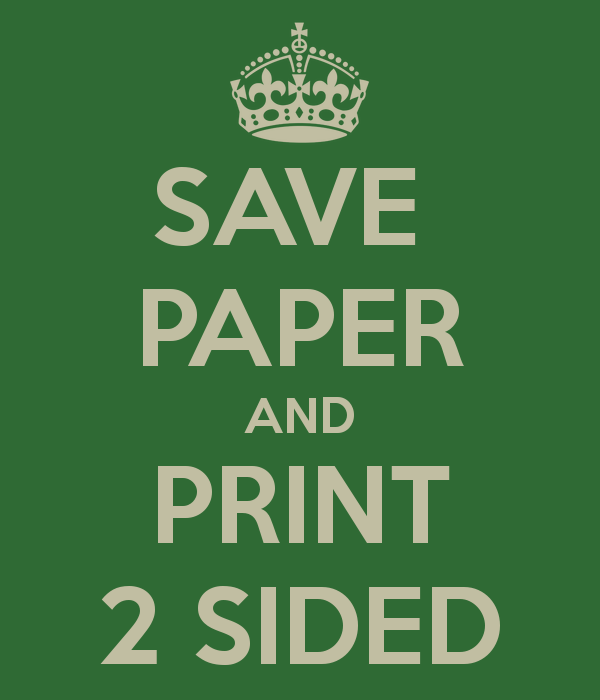 With an aim of saving precious paper pulp, Labour Department of the Delhi government has asked all its officials, including all deputy commissioners, to write notes on both sides of paper and type in single space.

The department has issued a circular directing officials to take such steps to minimise the impact on environment as trees are the major source of paper pulp production.

"Injudicious use of paper not only leads to infructuous expenditure but also impacts the environment as trees are the major source of paper pulp production," said a senior government official.

The official said notes should be typed/written on both sides of the paper or note sheet, adding that besides, typing should be done in single space.

The department's move come after Finance Ministry recently issued such guidelines to all Ministries in this regard.

According to the department, copies should not be typed again in the case the draft itself is legible and does not contain many corrections.

It further added that policy instruction and guidelines issued through orders and office memorandums etc. may be uploaded on website and number of hard copies of such communication may be limited to the required minimum.

Email ThisBlogThis!Share to TwitterShare to FacebookShare to Pinterest
Another good chance for GDS to select for PA/SA category :

It is learnt that about 200 vacancies in PA/SA category is going to be notified for GDS in A.P Circle.

The above orders of the Ministry of Personnel, Public Grievances & Pensions (Department of Pension & Pensioners Welfare) require to be endorsed by the Department of Posts for facilitating payment of enhanced FMA with effect from 19.11.2014 to Postal Pensioners.

The CHQ of the  All India Postal & RMS Pensioners Association seeks your kind intervention for causing the immediate release of endorsement orders.

AIPRPA FORMATION IN ALL DISTRICTS OF KERALA IN FULL SWING

FORMATION OF AIPRPA IN FULL SWING

Photos of both the above conventions: 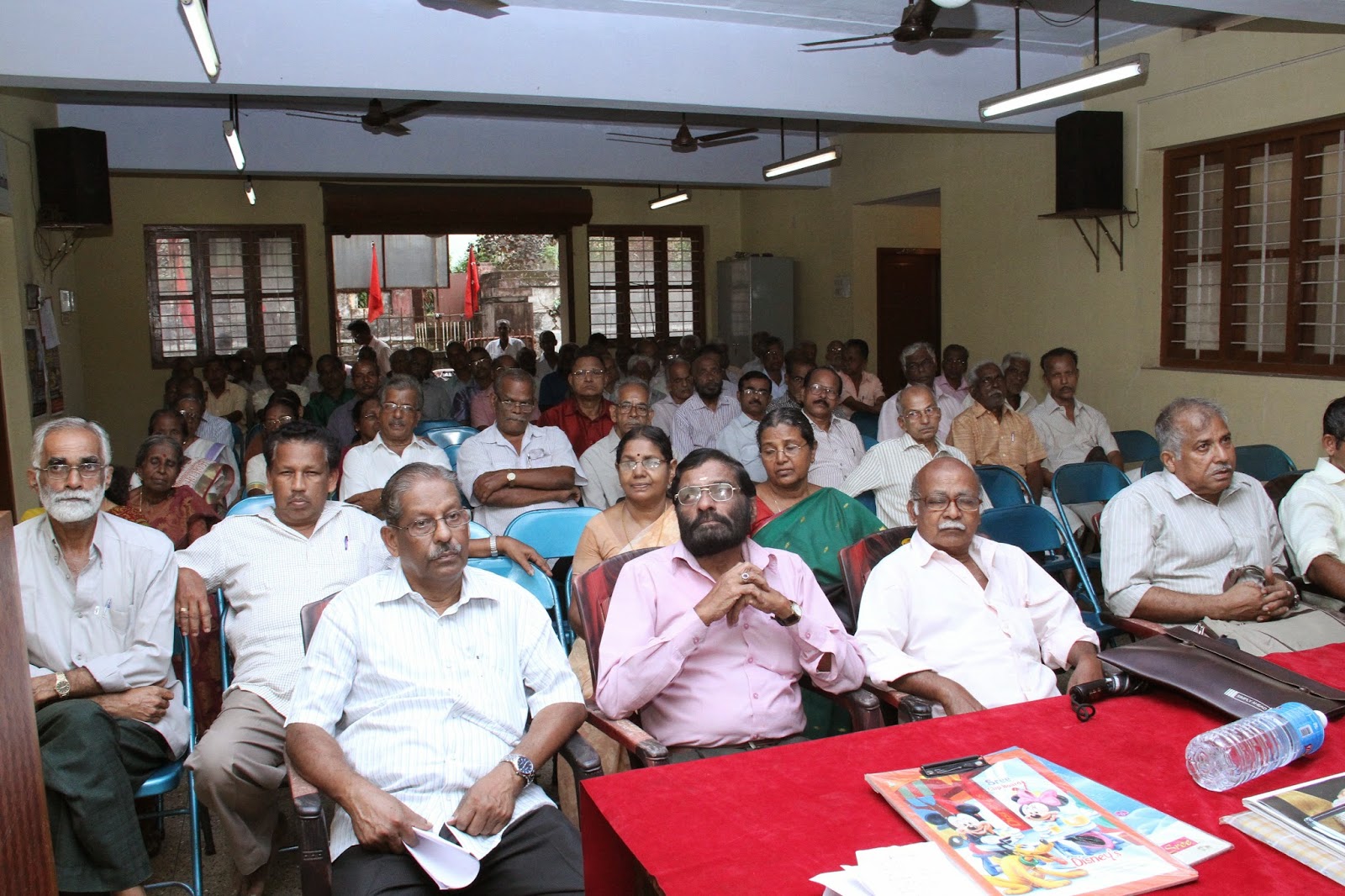 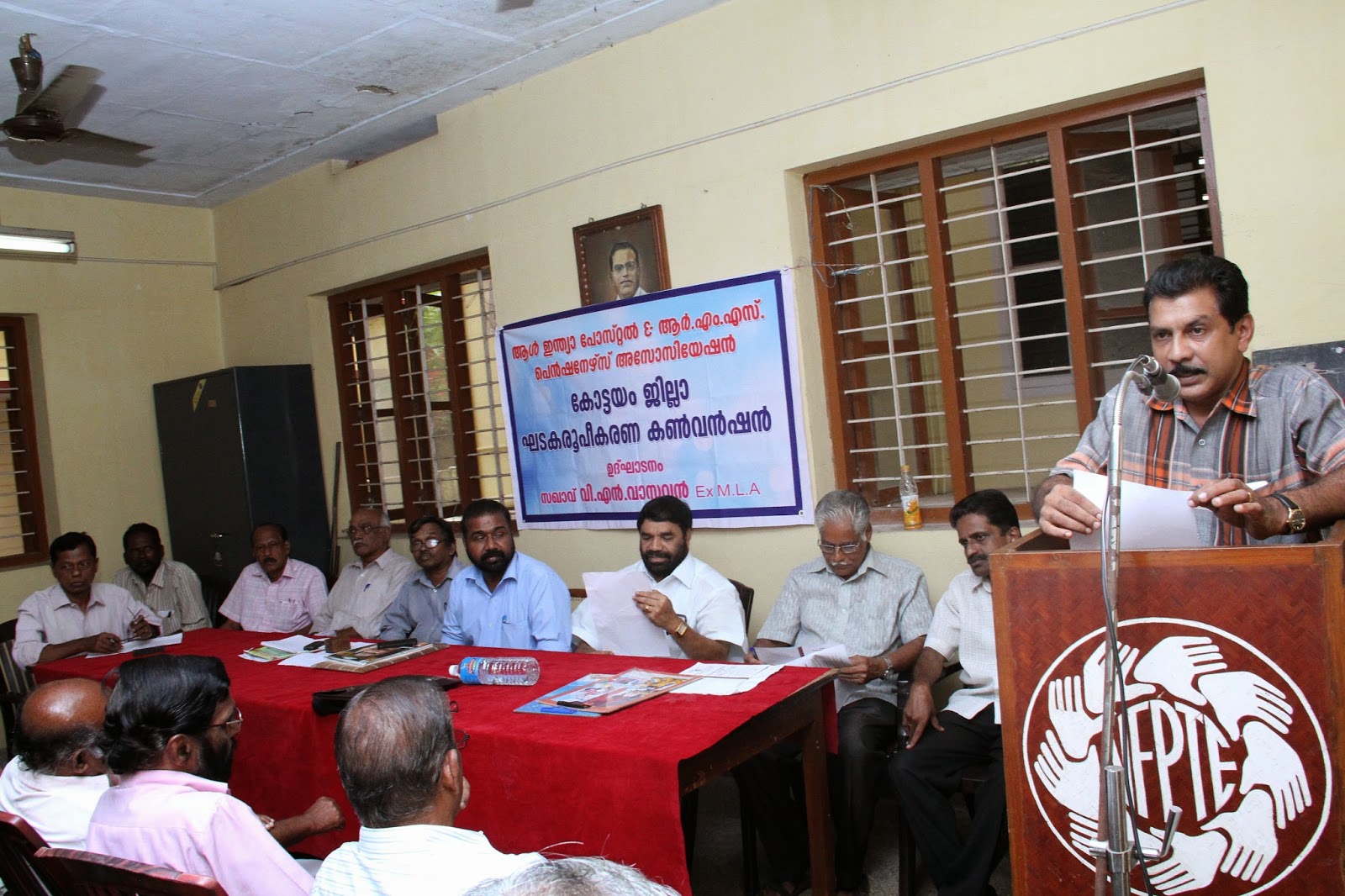 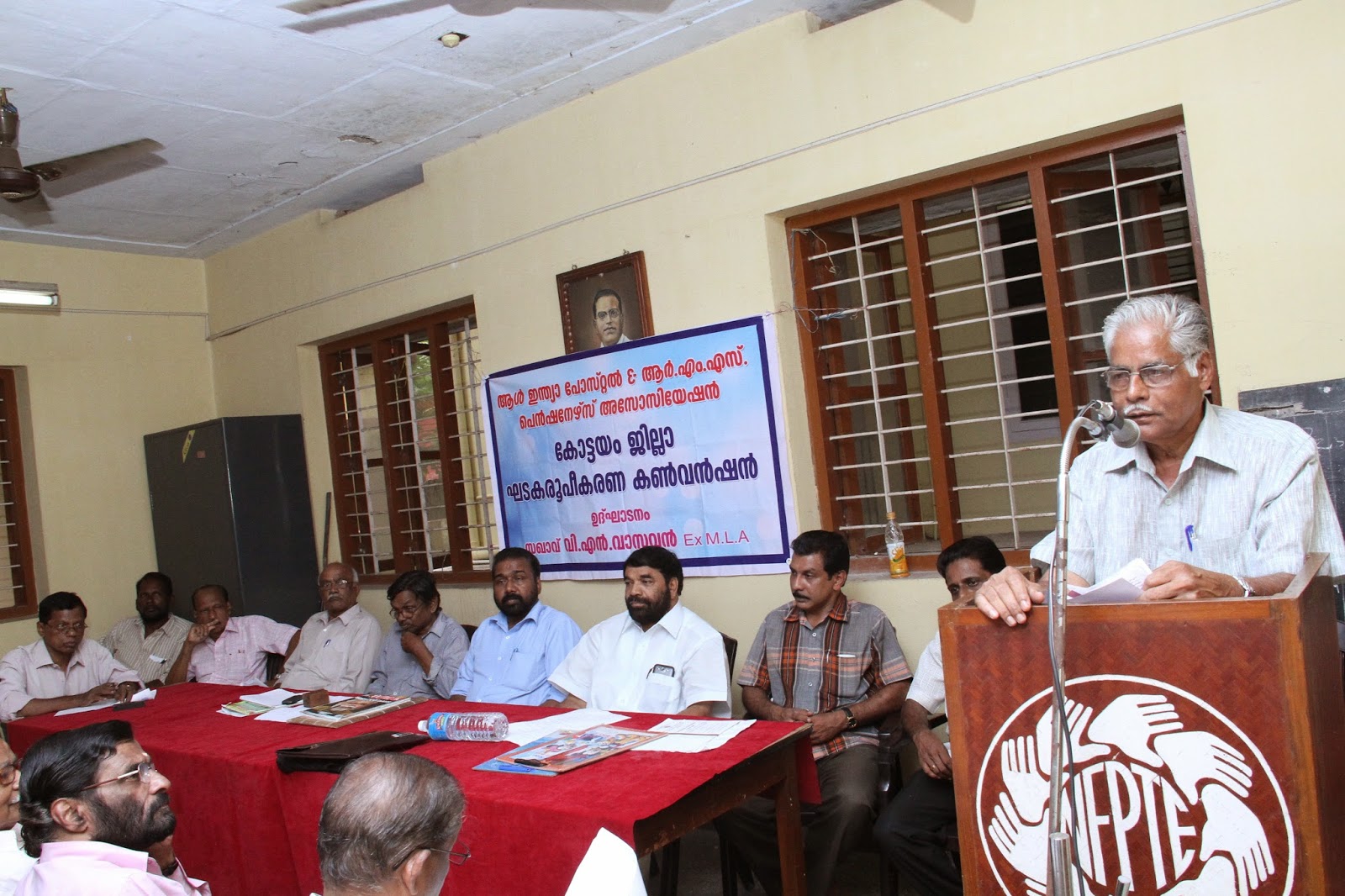 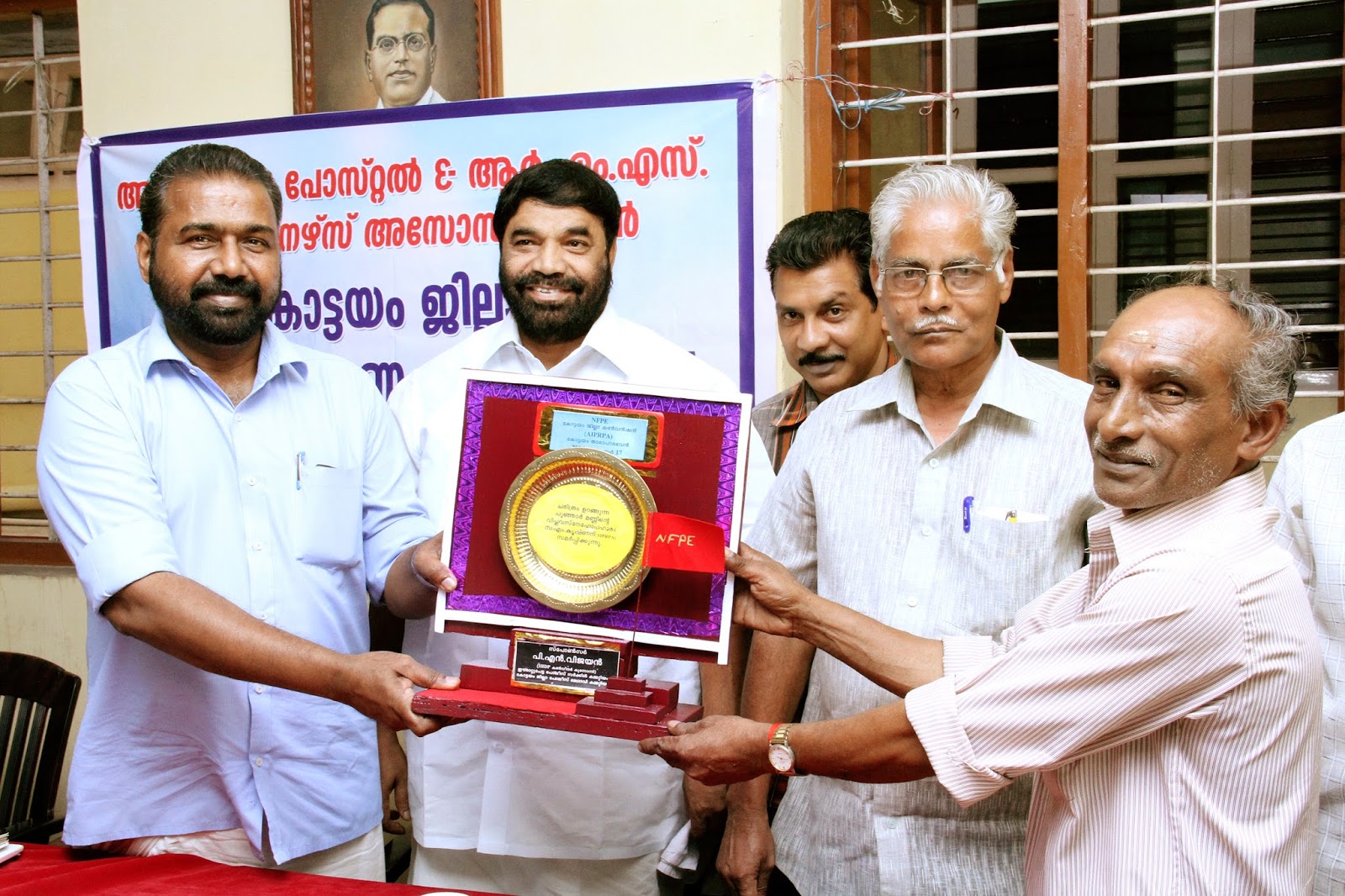 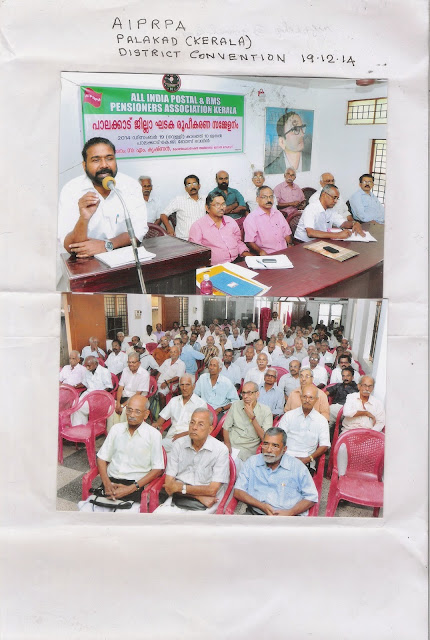 Bank Strike: IBA's letter to Chief Executives of Member Banks which are parties to the Bipartite Settlement

Dear Sirs,
Notice of Strike by United Forum of Bank Unions
The Convenor of United Forum of Bank Unions (UFBU) has served a notice of strike dated 22nd December, 2014 (copy enclosed) informing us of their decision to go on All India Bank Strikes as per details enclosed, demanding immediate withdrawal of IBA’s direction to Banks to re-visit the Mandate & immediate settlement of wage revision. A copy of the Notice listing their demands is also enclosed.

In the event of the strike materializing on the 7th & from 21st to 24th January 2015, we request you to take necessary steps/action including enforcing wage cut as may be necessary as per extant Government guidelines and guidelines issued by IBA from time-to-time and our circular No.PD/CIR/76/Q/ 177 dated 3rd May, 1993 and our circular No.CIR/HR&IR/76/Q/2009-10/ 1224 dated 25th August 2009. Please also advise all your branches/offices to prominently display a suitable notice regarding the proposed strike on as mentioned above for the benefit of customers and the general public.

We note to keep member banks informed of developments arising out of conciliation proceedings, if any, which may be initiated by the Conciliation Officer.

Sir,
In accordance with the provisions contained (1) of Section 22 of the I.D., Act - 1947, we hereby give you notice that the members of all the constituent unions of United Forum of Bank Unions (AIBEA, AIBOC, NCBE, AIBOA, BEFI, INBEF, INBOC, NOBW, NOBO) propose to go on

The details of the programme and the Statement of the case are furnished herein. 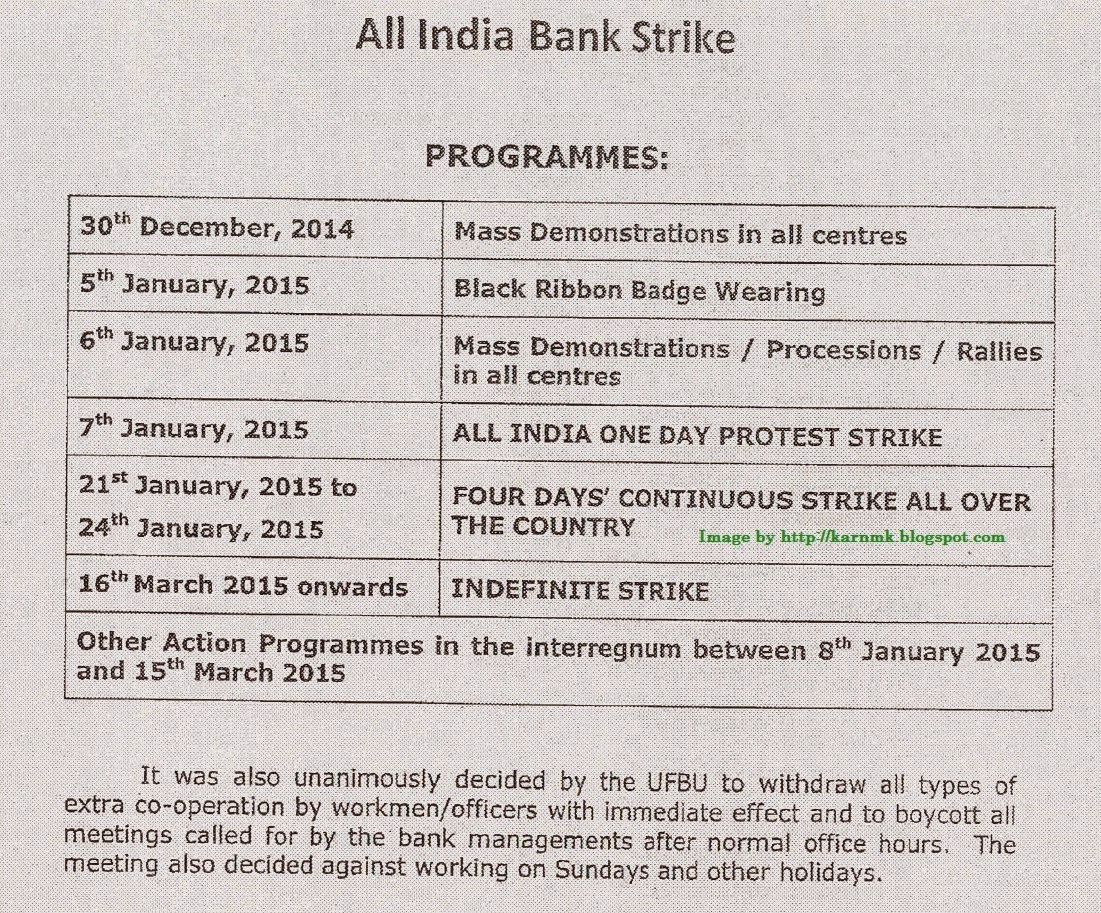