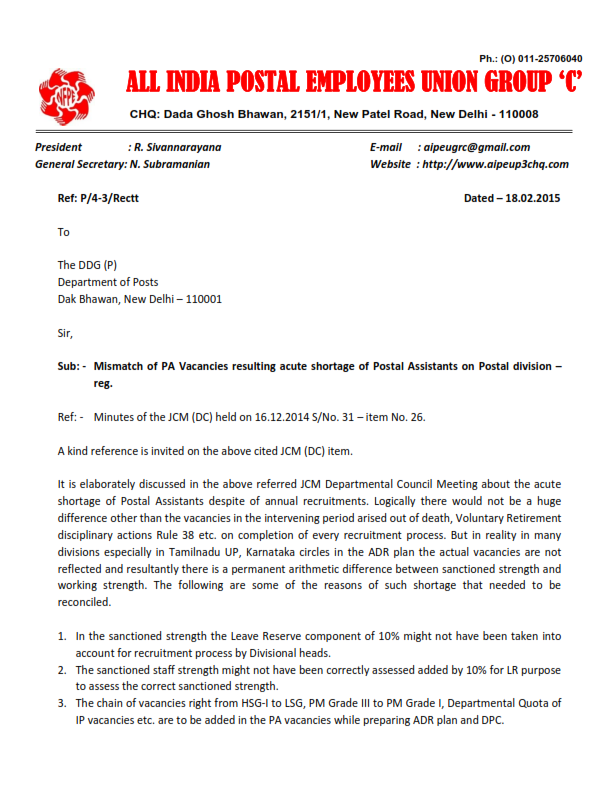 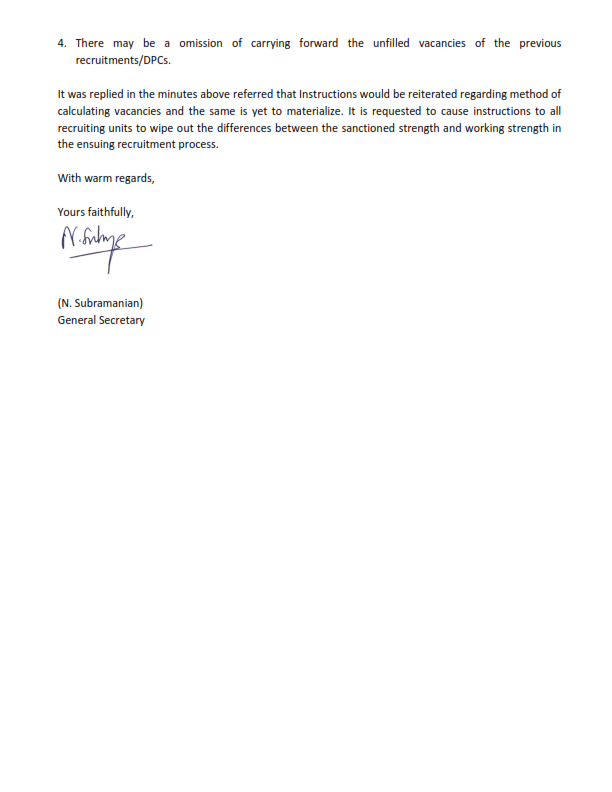 R. S. Puram HPO and Coimbatore Central SO are in HSG I status may kindly be notified for Postmaster Grade-III officials and the remaining three HSG I posts out of five available HSG-I Posts may be in the same line. This suggestion is not only scientific but also ensures justice both to HSG-I and Postmaster Grade-III.

Coimbatore division is a bigger unit and non availability of Postmaster Grade III posts in this division causing imbalance throughout the region and it is requested to cause action to change the R. S. Puram HO and Coimbatore central SO into Postmaster Grade-III office by making necessary adjustments in other divisions of western region Tamilnadu if need be.

A line in reply in this regard is highly appreciated.

The Seventh Pay Commission is expected to submit its recommendations by August and it has been asked to look at the issue of raising productivity and improving the overall quality of public services in the country.

NEW DELHI: The 14th Finance Commission has suggested linking pay with productivity with a focus on echnology, skills and incentives, a move aimed at raising the productivity of government employees.

The panel has recommended that in future additional remuneration be linked to increase in productivity.

The Seventh Pay Commission is expected to submit its recommendations by August and it has been asked to look at the issue of raising productivity and improving the overall quality of public services in the country.

The Sixth Pay Commission had also said that steps should lead to improvement in the existing delivery mechanism by more delegation and de-layering and an emphasis on achieving quantifiable and concrete end results. Emphasis is to be on outcome rather than processes, it had said. The earlier Pay Commissions had also made several recommendations to enhance productivity and improve administration.

The 14th Finance Commission's recommendations assume significance at a time when the Narendra Modi government has focused its attention to improve the delivery of public services and is taking steps to use technology to improve efficiency.

The Union government has taken several steps to shore up the bureaucracy and has changed the way attendance is measured in government offices.

"Further we recommend that Pay Commissions be designated as Pay and Productivity Commissions with a clear mandate to recommend measures to improve productivity of an employee," said the 14th Finance Commission headed by former Reserve Bank of India Governor Y.V. Reddy.

The Reddy panel said productivity per employee can be raised through the application of technology in public service delivery and in public assets created.

"Raising the skills of employees through training and capacity building also has a positive impact on productivity. The use of appropriate technology and associated skill development require incentives for employees to raise their individual productivities," the Reddy led panel said.

"A Pay Commission's first task, therefore, would be identify the right mix of technology and skills for different categories of employees. The next step would be to design suitable financial incentives linked to measureable performance," the panel said.

Quote of the Day February 27

Non-delivery of registered posts to the right addressee has cost the postal authorities dear with a consumer forum directing it to pay Rs.one lakh as compensation to an aggrieved consumer who lost his job due to the gross negligence.
Delivering an order on an appeal filed by V.Ravi of Auroville, the State Consumer Disputes Redressal Commission, comprising its president Justice K.Venkataraman and member K.K. Rithia said, “It is a clear case of default, gross negligence and misdelivery on the part of postal authorities without ensuring delivery of the postal articles to the right addressee, which caused mental agony and loss to the complainant.”
V. Ravi of Morattandi was working as supervisor in Auro Food Limited and the company was taken over by the International Bakery Products Limited, Thiruchitrambalam. As he fell sick and was extending the medical leave, the company conducted an inquiry against him by employing a domestic inquiry officer. He replied to the officer’s letter stating that his health condition did not permit him to attend the inquiry. Subsequently, he was informed that a further inquiry would be intimated to him. However, the company later terminated his services without any intimation. When Ravi contacted the inquiry officer, he showed the proof of delivery of two letters sent by the company. Ravi was shocked to see them as he had not received the letters . The Senior Superintendent of Post Offices, Puducherry Division, replied that it was delivered to a third party by mistake and hence action was contemplated against the person, who delivered the letters.
Filing a consumer complaint in the District Consumer Forum, Puducherry in 2010, Mr. Ravi said due to the non-delivery of the letters , his life was ruined and his family members were put to mental stress besides costing him his job. The district forum dismissed his complaint holding that he was not entitled to any relief.
Hence Mr. Ravi preferred the appeal before the State Consumer Disputes Redressal Commission.
“It is a clear case of default, gross negligence and misdelivery’’
Source : http://www.thehindu.com/
Posted by gudurpost ************ at 9:50 PM 0 comments

The Puducherry Government Employees Federation (PGEF) on Thursday announced a dharna on March 2 urging the Union Government to meet a charter of demands, including the retrospective implementation of the Seventh Pay Commission recommendation from January 1, 2014.
The PGEF honorary president C.H. Balamohanan, general secretary M. Premadasan and other office-bearers announced the dharna in solidarity with the Central Government Employees and Workers Federation which has called for a series of protests across the country.
Mr. Balamohanan said service conditions and rules pertaining to the Central government employees are also applicable to 25,000 government employees in Puducherry as well.
Demanding salary revision once in five years, the officer bearers of the federation said now the salaries of Central government employees here have been revised once in 10 years and even though the Union Government has constituted the Seventh Pay Commission on January 1, 2014, there is no symptom of giving its final recommendation within eighteen months.
“We demand that Seventh Pay Commission recommendation should be applied with retrospective effect from January 1, 2014 and interim monetary benefit should be extended immediately. Besides, 100 per cent dearness allowance should be merged with basic pay and anomalies in the implementation of Sixth Pay Commission should be removed,” said Mr. Balamohanan.
They also said the government should give up the privatisation of railway and defence and the corporatisation of postal department and should fill vacant posts after lifting the ban on recruitment.
The federation also demanded the Union Government not to amend labour laws.
Meanwhile, Central trade unions on Thursday conducted a road blockade near Indira Gandhi Square. Earlier they took out a procession from Ellaipillaichavadi. Trade union leaders condemned the Union Government for amending labour laws and adopting ordinance route to amend Land Acquisition Act.
They said the Centre has not shown any interest on the charter of demands of all central trade unions.
The leaders also charged the government with implementing contract labour systems in all sectors.
Around 150 of them were taken into custody by police and later released.

Addendum to SB Order No. 2/2015 on Sukanya Samriddhi Account (SSA) 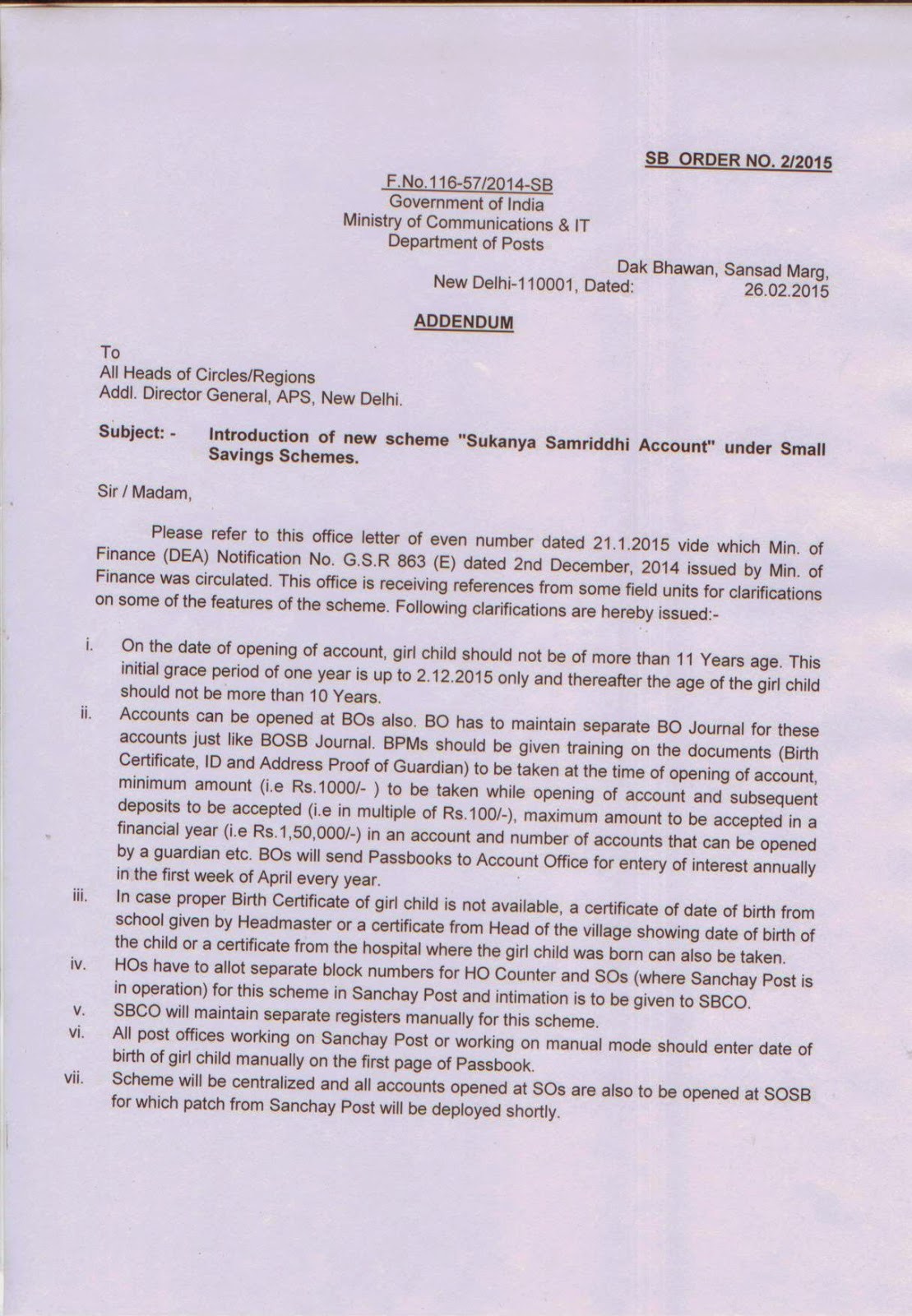 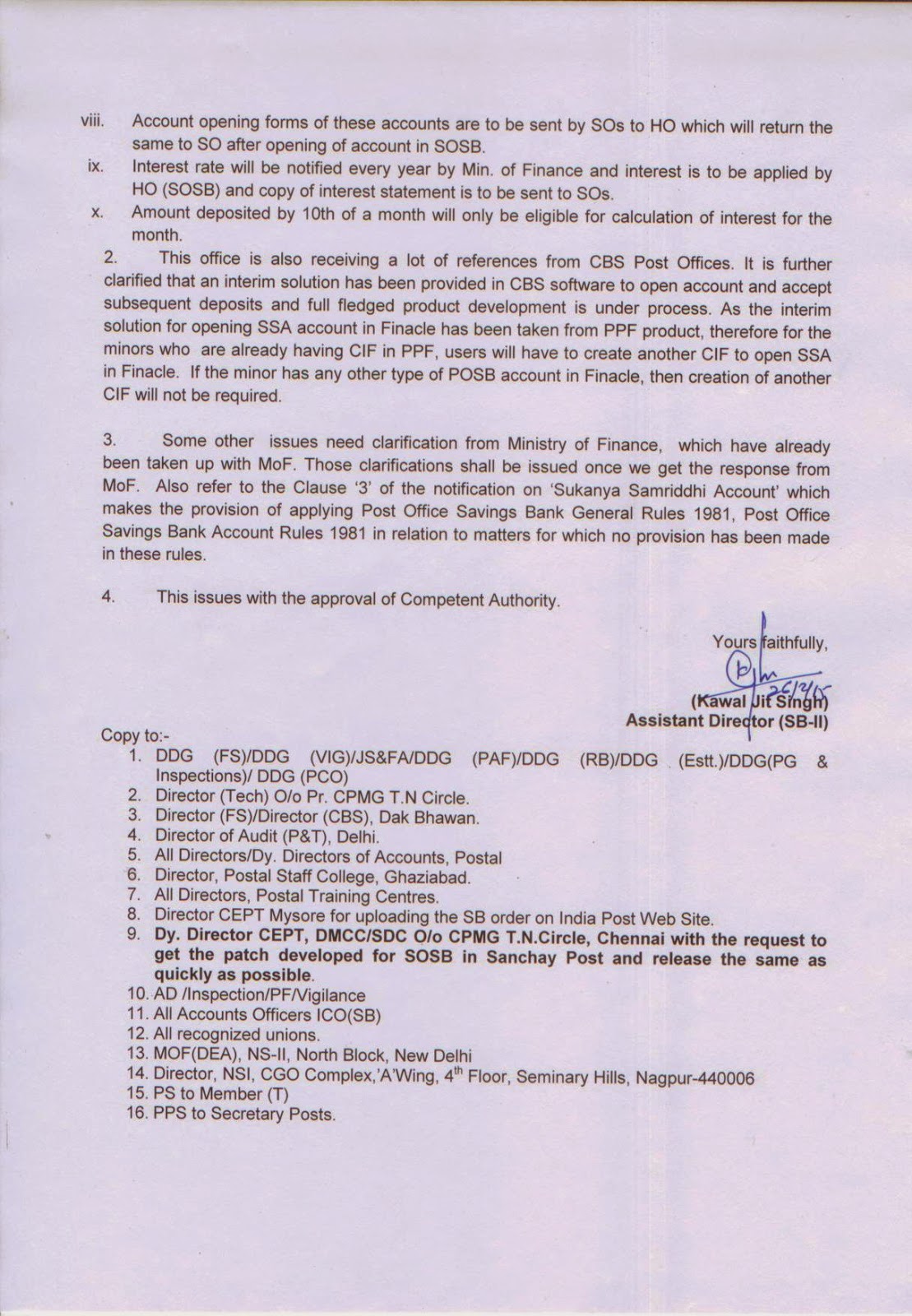 Dear Friends / Visitors... Do you want to share anything with us???. You can send your Study Materials, Tips & Tricks, Inspirational Stories and other Articles to us to "sapost2@gmail.com" with your Name, Place and Profession. Good Articles will be published in this blog with your Name and e-mail (optional) ..... Thank you

Get Free eMail Updates! By Submitting your email address:

All the information published in this webpage is submitted by users or free to download on the internet. I make no representations as to accuracy, completeness, currentness, suitability, or validity of any information on this page and will not be liable for any errors, omissions, or delays in this information or any losses, injuries, or damages arising from its display or use. All information is provided on an as-is basis. All the other pages you visit through the hyper links may have different privacy policies. If anybody feels that his/her data has been illegally put in this webpage, or if you are the rightful owner of any material and want it removed please email me at "sapost2@gmail.com"and I will remove it immediately on demand. All the other standard disclaimers also apply.