Subject: Implementation of the recommendations of the 7th Pay Commission- Fixation of pay and Payment of arrears – instructions Regarding

The undersigned is directed to refer to the Government of India, Ministry of Finance, Department Of Expenditure’s Resolution No. 1-2/2016-IC dated 25/07/2016, bringing out the decisions of the Government On the recommendations of the 7th Central Pay Commission as well as the consequent promulgation of the Central Civil Services (Revised Pay) Rules, 2016, notified vide G.S.R NO. 721(E) dated 25th July, 2016 regarding fixation Of pay in the revised pay structure effective from 01.01.2016 and to say the provisions governing such fixation Of pay have been clearly enunciated in the said Rules.
2. Accordingly in pursuance of the CCS (RP) Rules, 2016, appropriate necessary action to fix the pay of the employees covered thereunder in the revised pay structure needs to be carried out forthwith in accordance with the provisions contained therein. In order to facilitate a smooth and systematic fixation of pay, a proforma for the purpose (Statement of Fixation of Pay) is enclosed at Annexure. The statement of fixation of pay in revised pay structure as per CCS (RP) Rules, 2016 be prepared in triplicate and one copy thereof be placed in the Service Book of the employee concerned and another copy made available to the concerned accounting authorities [Chief Controller Of Accounts/Controller Of Accounts/Accounts Officer] for post-check.
3. The revised pay structure effective from 01.012016 includes the Dearness Allowance of 125% sanctioned from 01.01 2016 in the pre-revised pay structure. Thus, Dearness Allowance in the revised pay structure shall be zero from 01.01.2016. The rate and the date of effect of the first installment of Dearness Allowance in the revised pay structure shall be as per the orders to be issued in this behalf in future.
4. The decision on the revised rates and the date of effect of all Allowances (other than Dearness Allowance), based on the recommendations of the 7th Central Pay Commission shall be notified subsequently and separately. Until then, all such Allowances shall continue to be reckoned and paid at the existing rates under the terms and conditions prevailing in the pre-revised pay structure as if the existing pay structure has not been revised under the CCS (RP) Rules, 2016 issued on 25.072016
5. The contributions under the Central Government Employees Group Insurance Scheme (CGEGIS) shall Continue to be applicable under the existing rates until further orders,
6. The existing system on interest free advances for medical treatment, Travelling Allowance for family Of deceased, Travelling Allowance on tour or transfer and Leave Travel Concession shall continue as hitherto.
7. The arrears as accruing on account Of revised pay consequent upon fixation Of pay under CCS Rules. 2016 with effect from 01 012016 shall be paid in cash in one installment along with the payment Of salary for the month Of August, 2016, after making necessary adjustment on account of GPF and NPS, as applicable, in view of the revised pay. DDOs/PAOs shall ensure that action is taken simultaneously in regard to Government’s contribution towards enhanced subscription.
8. With a view to expediting the authorization and disbursement of arrears, it has been decided that the arrear claims may be paid without pre-check Of the fixation of pay in the revised scales of pay, However, the facilities to disburse arrears without pre-check of fixation of pay will not be available in respect of those Government servants who have relinquished service on account of dismissal, resignation, discharge, retirement etc. after the date Of implementation of the Pay Commission’s recommendations but before the preparation and drawl Of the arrears claims, as well as in respect of those employees who had expired prior to exercising their option for the drawal of pay in the revised scales.
9. The requirement of pre-check of pay fixation having been dispensed with, it is not unlikely that the arrears due in some cases may be computed incorrectly leading to overpayments that might have to be recovered subsequently. Therefore, the Drawing & Disbursing Officers should make it clear to the employees under their administrative control, while disbursing the arrears; that the payments are being made subject to adjustment from amounts that may be due to them subsequently should any discrepancies be noticed later. For this purpose, an undertaking as prescribed as per a “Form of Option” under Rule 6(2) of the CCS(RP) Rules, 2016 shall be obtained in writing from every employee at the time of exercising option under Rule 6(1) thereof,
10. In authorizing the arrears, Income Tax as due may also be deducted and credited to Government in accordance with the instructions on the subject.
11. On receipt of the necessary options, action for drawal and disbursement Of arrears should be completed immediately.
12. Hindi version will follow.
(R.K Chaturvedi)
Joint Secretary to the Government of India
Download : 7thCPC pay fixation and Payment of Arrears
Source : Finmin.nic.in
Posted by gudurpost ************ at 11:11 PM 0 comments

New Secretary Posts Of Postal Board 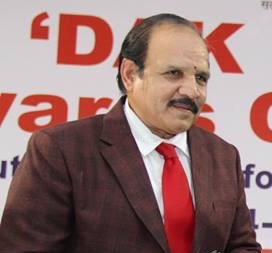 Sri Boyapati Venkata Sudhakar (IPoS 1981) is appointed as  Secretary, Postal Services Board.  Sri B.V.Sudhakar, born on 18.04.1957 in Kammapalem village of Nellore District of Andhra Pradesh State is a 1981 batch IPoS officer and worked in various capacities in combined AP circle as DPS Hyderabad region, PMG Vijayawada & Kurnool regions and as Chief Postmaster General from May 2013 to Aug 2015.From Aug 2015 onwards, working as Member (PLI) & Member(Tech). He is well known for his dynamism, allround knowledge and proactive attitude to set new bench marks on  development side of the Department. He is a great sports lover and will play all kinds of games like Cricket, Volleball, Badminton etc like a professional player at this age also. Apart from that, he is a great Swimmer and a nature lover.
Congratulations to the officer and wish the officer all success in rejuvenating the Postal Department and take it to new heights not only in providing better services but also in revenue generation.

NFPE GUDUR EXPRESSING ITS HEARTEST CONGRATULATIONS
We Hope that there will be betterment for GDS Cadre in his resume
Posted by gudurpost ************ at 11:27 AM 0 comments 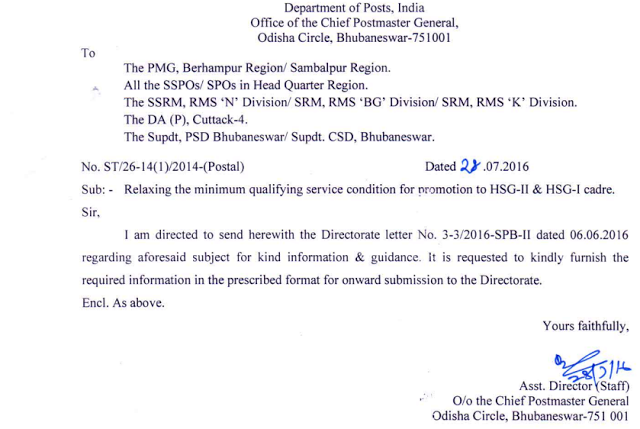 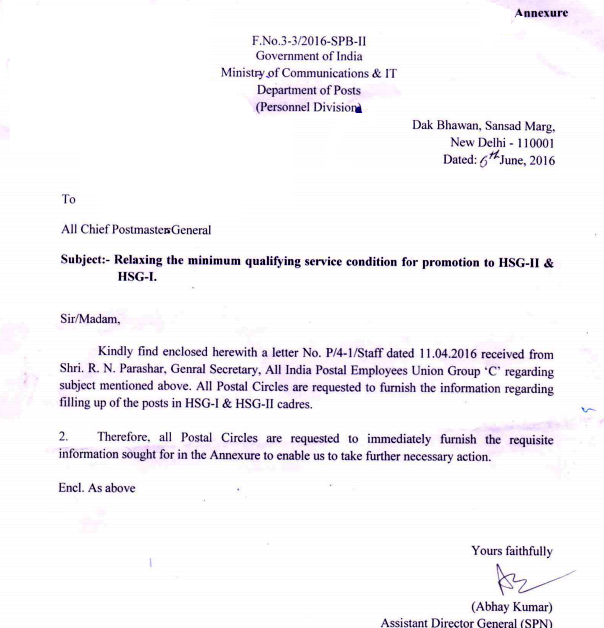 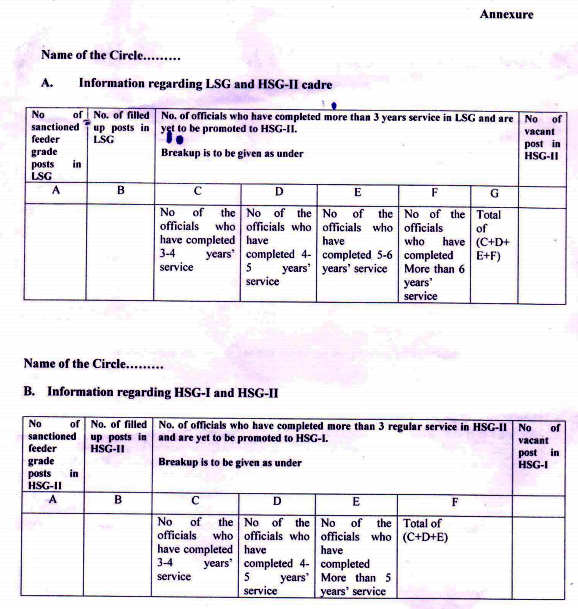 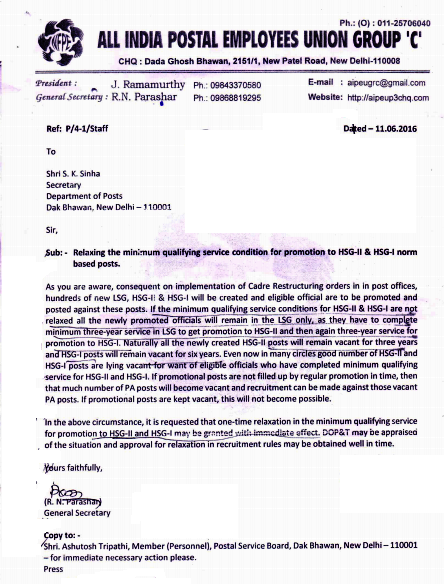 The Centre on Tuesday agreed in principle to put on hold the decision mandating “public servants” to disclose their assets before July 31 in line with a Lokpal Act provision. The government was responding to concerns raised by both political and apolitical quarters, and will now further examine the order’s implications.

On Monday, Prime Minister Narendra Modi told a delegation of senior political leaders, including Sharad Pawar, Digvijaya Singh and D. Raja, that there was merit in the case for review of some of the Lokpal Act’s provisions, including that of the definition of “public servant.” The Prime Minister told them that he would ask the Home Ministry to extend the deadline regarding declaration of assets.

“Our impression from the government is that it agrees with the contention on the adverse implications of ‘public servant’ as defined under the Lokpal Act. To begin with the government is expected to put on hold the notification and then bring in some amendments which would be referred to the Parliamentary Standing Committee. It is immediately not clear if the amendments would be moved in the ongoing session of Parliament,” Mr. Raja told The Hindu.

In the last few weeks, several organisations have been seeking similar clarifications from the government.

As per the notification issued last month, officials and senior employees of bodies receiving funds from overseas, or from the government beyond specified limits, are covered under the Act, and must disclose their assets and those of their spouse and dependent children by July 31. This makes the law applicable to many charitable organisations and their functionaries, and can impede philanthropic activities.
Posted by gudurpost ************ at 5:57 PM 0 comments

The Centre may reconsider its move to forfeit Provident Fund (PF) savings of employees who fail to claim them for seven years, Union Labour and Employment Minister Bandaru Dattatreya said .

The minister’s assurance about taking up the issue with Finance Minister Arun Jaitley was made to calm irate central trade union leaders, who walked out in protest from a meeting of the trustees of the Employees’ Provident Fund Organisation (EPFO) in the capital, over an unlisted agenda item placed at the meet to inform them about the finance ministry notification The move was announced in last year’s Budget and notified this March .

According to the March 18 notification, deposits that remain unclaimed for over seven years in savings instruments such as EPF, Public Provident Fund (PPF), Post Office Savings Accounts, Post Office Recurring Deposit Accounts and National Savings Certificates, are to be diverted to finance a new Senior Citizens’ Welfare Fund .

The EPFO board members were informed that the Finance Act of 2016, notified on May 14, had an overriding clause that renders any provisions of any other laws related to the issue, such as the EPF Act of 1952, ineffective The unclaimed deposits of EPF contributors cannot be diverted for any other purposes, as per the EPF scheme drafted under the 1952 law .

EPFO is now required to notify a list of unclaimed amounts and transfer them to the new Fund within a year of the date of such notification “Any person, including an EPF subscriber, can claim from the EPFO from any amount transferred to the said Fund up to 25 years of such transfers,” the agenda item of the EPFO trustees’ meet said .

Agitated at the government going ahead with the forfeiture of employees retirement savings despite their reservations, union leaders who are on the EPFO board walked out within an hour of the meeting and staged a demonstration outside the EPFO headquarters .

The Labour Minister, who is the chairman of the CBT, pacified the trade unions and persuaded them to attend the meeting “Don’t be provoked No money has been diverted to the finance ministry yet We will hold discussions with them,” Mr Dattatreya said, adding that the decision to set up a fund was taken by the finance ministry looking into the “overall social security and idea of a pensioned society”.

“It is your duty to persuade the Finance Minister to withdraw the provision related to taking away the PF money of workers If the Finance Minister doesn’t agree, as a Chairman of the CBT you should file a case on our behalf,” said AITUC Secretary and CBT member DL Sachdev CITU President AK Padmanabhan said the move is a “complete violation” of the labour minister’s assurance that “there will be no inoperative account.”
Posted by gudurpost ************ at 5:56 PM 0 comments

A press release from the division on Wednesday said that these centres are located in post offices, but was falling below the minimum ticket booking norms of 25 tickets per day, fixed by the Railway Board. 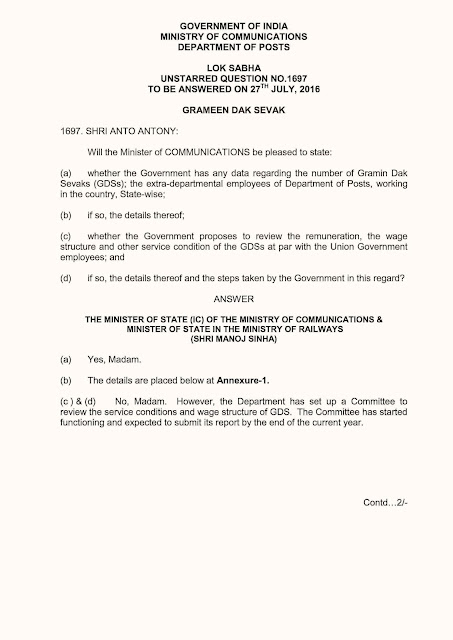 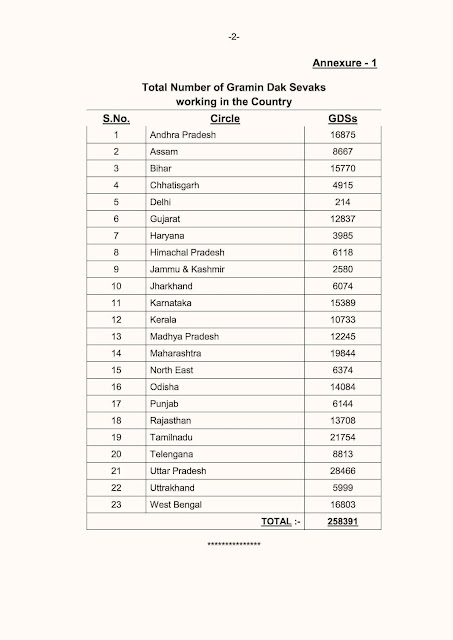 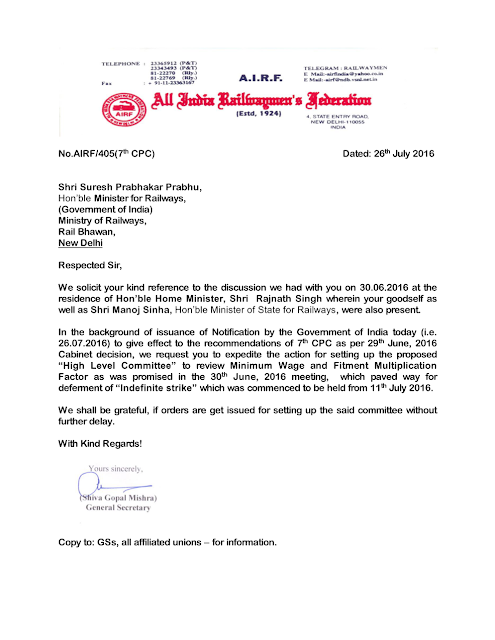 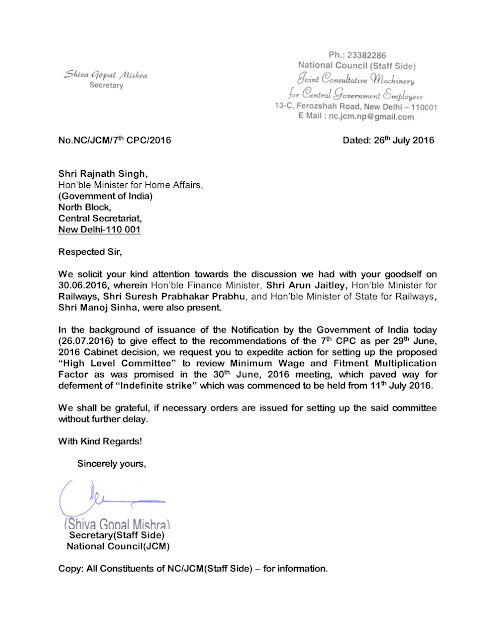 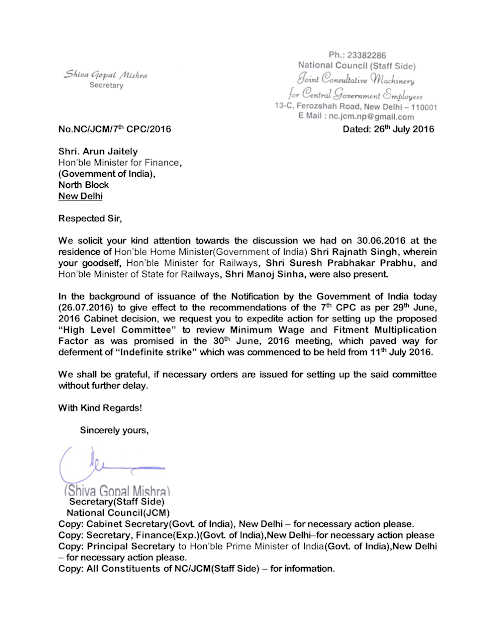 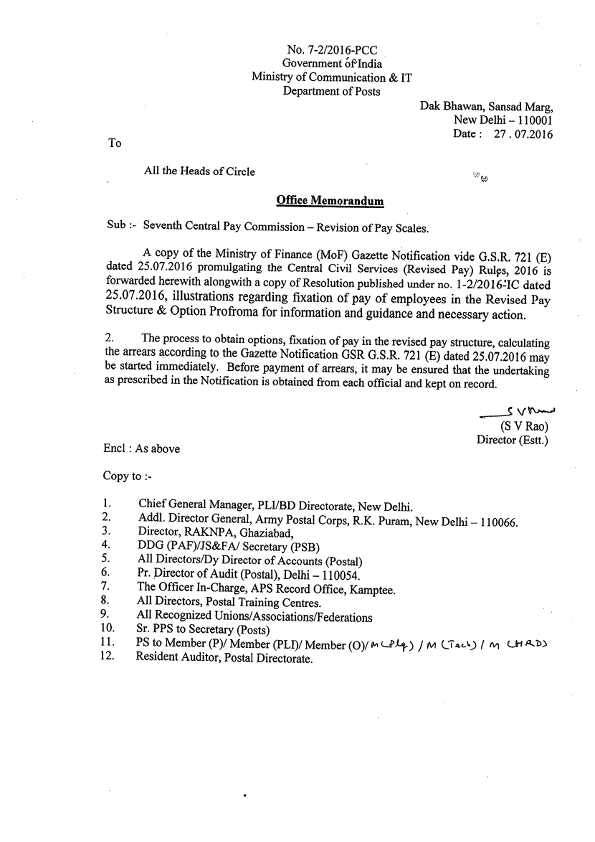 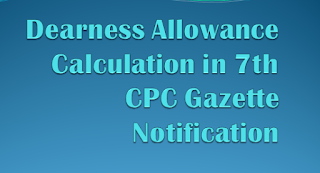 The Recommendations on Allowances (except Dearness Allowance) will be referred to a Committee comprising Finance Secretary and Secretary (Expenditure) as Chairman and Secretaries of Home Affairs, Defence, Health and Family Welfare, Personnel and Training, Posts and Chairman, Railway Board as Members. The Committee will submit its report within a period of four months. Till a final decision on Allowances is taken based on the recommendations of this Committee, all Allowances will continue to be paid at existing rates in existing pay structure, as if the pay had not been revised with effect from 1st day of January, 2016.
V. Dearness Allowance:
Source:http://egazette.nic.in/WriteReadData/2016/170924.pdf
Posted by gudurpost ************ at 12:32 PM 0 comments