1982-85: Alternate Governor for India , Board of governors, International Monetary Fund

October 1991: Elected to Rajya Sabha from Assam on Congress ticket

1996 onwards: Member, Consultative Committee for the ministry of finance

1972-74: Deputy for India in IMF Committee of Twenty on
International Monetary Reform

Our Prime Minister seems to be the most qualified PM all over the world.

THE MESSAGE IS LOUD AND CLEAR
AWAKE, ARISE, UNITE

The 9th Federal Council of NFPE held at Hyderabad from 9th to 13th June 2013, gave a clarion call to the five lakhs Postal and RMS employees including Gramin Dak Sevaks (GDS) to be ready for an indefinite strike, in case our demand for setting up of seventh Central Pay Commission (CPC) and merger of DA with pay is rejected by the Central Government. The conference in one voice also demanded the Government to withdraw the Contributory Pension Scheme and scrap the Pension Fund Regulatory and Development Authority (PFRDA) Bill. It further decided that even if Pay Commission is appointed, if the Government refuse to include the revision of wages and service conditions of GDS in the term of reference of the CPC and grant the DA merger benefit to GDS, entire employees shall go on indefinite strike.

Finally, as in the past, as a logical corollary, the Railway and Defence employees Federations have also decided to go for an indefinite strike raising the 7th CPC and DA merger demand. Due to conscious and persistent effort made by Confederation, especially its versatile and undisputed leader Com. S. K. Vyas Ji, a joint meeting of AIRF, AIDEF and Confederation was arranged on 29th July 2013 and Joint Council of Action (JCA) is formed, the JCA decided to organize various campaign programmes, culminating in indefinite strike. As a first step it is decided to submit a letter to the Government listing out the demands and also its time-bound settlement. The seven point charter of demands includes setting up of 7th CPC, DA merger, compassionate appointment, regularization of GDS and Casual Labourers, Scrapping of PFRDA Bill, removal of bonus emolument ceiling, functioning of JCM and implementation of arbitration awards. Even though in the past, the dominant leadership of the National Council JCM has taken a stand that as GDS do not come under JCM, their demand cannot be included, this time the Confederation and NFPE leadership could convince them and they agreed for inclusion of GDS demands also.

Thus a situation has emerged wherein the entire Central Government employees stands united and determined to realize just and genuine demands. The message is loud and clear. Now it is the duty and responsibility of each and every one of us to carry the message to the grass-root level workers and build up broadest unity among the rank and file. Once such a rock-like unity for struggle is achieved, no Government can reject our justified demands. Time is short. Let us awake, arise and unite.
Posted by gudurpost ************ at 6:05 PM 0 comments

Email ThisBlogThis!Share to TwitterShare to FacebookShare to Pinterest
Details/Pattern of Postal/Sorting Assistant (PA/SA) Phase-II Exam 2013 (Computer/Typing Test)
Now as Postal Department started publishing the List of Shortlisted Candidates for Paper-II based on the performance in Paper-I(Aptitude Test), its time now to understand the details of Paper-II (Computer Typing/Data Entry Test) & Practice it.

Here is the list of number of candidates shortlisted from each Circle based on the results declared so far.

Pattern of Paper-II (Computer / Typing Test):
The Typing Test shall be for a duration of 30 minutes (15 minutes each for Typewriting and data entry) consisting of one passage of 450 words in English or 375 words in Hindi to be typed with a minimum speed of 30/25 words per minute respectively & Data entry of some figures and letters each carrying equal marks on Computers.

The typing test and test of data entry operations will be conducted on Computer key board but not on type writer.

Note: The final merit shall be prepared on the basis of the aggregate marks obtained by the Applicants in the Aptitude Test (Paper I) only subject to their qualifying in Computer/Typing test ( Paper II). ie, there will be no marks for Typing/Data entry test. You have to just qualify the minimum criteria in Paper-2 and final merit list shall be prepared on the basis of marks of Paper-I only.

TREATMENT ON EMERGENCY CAN BE MADE IN NON EMPHANELLED PRIVATE HOSPITAL


Revision of rates for reimbursement of medical expenses incurred in emergency conditions under CS (MA) Rules, 1944

The undersigned is directed to state that the issue of revision of rates for reimbursement of medical expenses incurred on availing medical treatment in emergency conditions under CS (MA) Rules, 1944, when treatment is taken in a non-empanelled private hospital, has been under consideration of the Government for some time.

2. It has now been decided that, reimbursement of medical expenses incurred by a Central Government employee covered under CS(MA) Rules, 1944 on availing medical treatment for himself and his dependent family members in emergency conditions, would be allowed as per the prevailing non –NABH CGHS rates as applicable to a CGHS covered city and non-NABH rates applicable to the nearest CGHS covered city in case of non-CGHS city, as the case may be, or the actuals, whichever is less.

4. This OM supersedes all earlier orders issued from time to time under CS (MA) Rules, 1944 on this subject for allowing reimbursement of medical expenses in emergency conditions when treatment is taken in a non-empanelled private hospital.

5. This OM will come into effect from the date of issue.

RANCHI: Postmen in the city are protesting under the banner All India Postal Employees Union (AIPEU). As part of the national protest they have several demands but on Tuesday the Ranchi postmen distributed letters wearing half pants and vests because they feel they are not provided proper uniform, shoes and umbrella.

"We are given poor quality uniform. As a mark of protest we decided to distribute letters without wearing the uniform," provincial secretary ofAIPEU, Ravindra Dev Singh said, adding that Tuesday was the fifth day of their protest. Earlier, they protested at the post office on June 18, 20 and 22 and went on a hunger strike on July 9."

With several other demands the union is now threatening to go on an indefinite strike. About their other demands Singh said, "Our first demand is that the beat, the area covered by every postman, should be redistributed. The beats were distributed many years ago. Earlier, where there were single storied houses now there are multi-storied buildings. So we want proper redistribution of beats so that one postman doesn't have to do too much work."

"We also want that new recruits to be taken as many have retired or died during their term," he added.

Other demands of the union include revision of departmental examination syllabus and allowing postmen to skip data entry.

Singh said if the government does not give in to their demands they will intensify their protest.

About their future course of action Singh said, "If our demands are not fulfilled we will give a notice on August 17 to the circle working committee members and postal department secretary making our demands clear. We will also go on an indefinite strike from September 16." 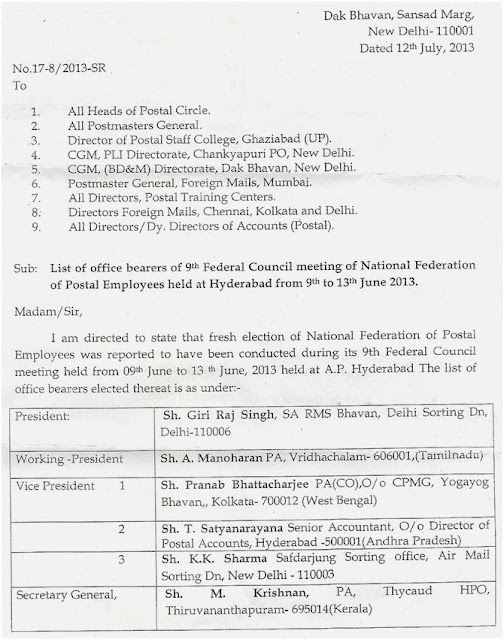 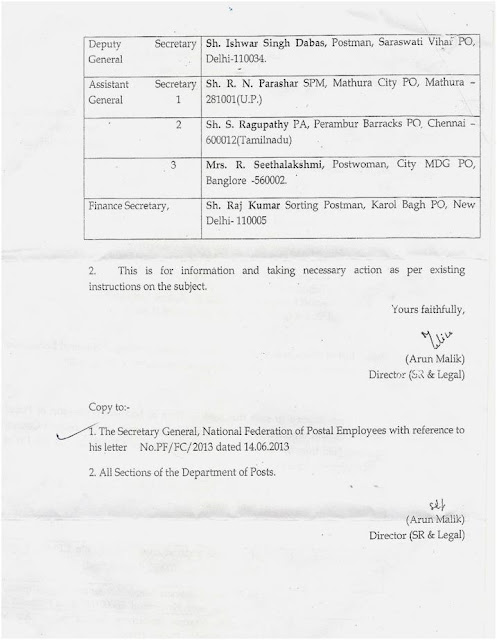 The first meeting of the National Secretariat of the Confederation was held at New Delhi on 22.07.2013. Com. K. K. N. Kutty, National President, presided. The following office bearers were present:

The following office bearers applied for leave/expressed their inability to attend:

The following office bearers could not reach due to train late/cancellation:

The following comrades were absent:

Com. S. K. Vyas, Advisor, in his opening remarks, explained the background of events which led to the formation of a Joint Council of Action of Railway (AIRF) Defence (AIDEF) and Confederation and also pointed out its weaknesses and limitations. He stressed the need to further strengthen the unity. He opined that on the 15 point charter of demands, Confederation must conduct its own independent campaign and agitational programmes. If the Railway and defence Federations come forward for serious agitational programmes including indefinite strike we must join such campaign and strike action.

Com. M. Krishnan, Secretary General made a brief presentation of the Conference proceedings, which was approved by the house after discussion.

2. 15 Pointes charter of demands and future course of action.

The meeting decided to organize independent campaign and agitational programmes culminating in indefinite strike. The specific decisions were:
(i) To organize state level joint strike conventions of C-o-C with the participation of all affiliated unions/Associations/Federations during the month of August 2013. Whereever the C-O-C functioning is not satisfactory or has no participation of district units, efforts must be taken to revamp the committee.
(ii) To organize mass Relay dharna at different places in all important stations during the first week of September 2013 (from 02.09.2013 to 07.09.2013).
(iii)To conduct nationwide strike ballot during the last week of September 2013 (On 25, 26 and 27thSeptember) Model of the ballot will be sent later.
(iv)To convene the Central Working Committee/Central Executive committee meetings of all affiliated unions/Associations/Federations before the 1st week of October 2013. All India Office Bearers of the Confederation may be invited to attend the meeting.

3.      Joint programme of AIRF, AIDEF and Confederation:
It was decided to make all out effort to further strengthen the Joint council of action (JCA) and also to launch serious agitational programmes culminating in indefinite strike before December 2013.

4.      Formation of State Committees and District Committees
It was decided to reorganize the COCs which are defunct or not functioning satisfactorily. This is to be done when the state level strike campaign conventions are organized. Participation of representatives of all affiliates should be ensured in the conventions.

6.      Organising Trade Union Education Camp:
It was decided to hold the Trade Union Education Camp at Mumbai in November/December 2013. Number of participants shall be 150 (maximum). Delegate fee Rs. 600/- per delegate Postal, ITEF, Audit & Accounts and Atomic Energy delegates accommodation shall be arranged by their respective Federations. C-O-C Mumbai shall function as the Reception committee. Date and Venue will be intimated later.

8.      Financial Review:
Financial Secretary shall present the actual picture in the next meeting. Meanwhile letters should be sent to all affiliated unions to remit the arrears of quota immediately.

10.  Affiliation to new organizations:
The application for affiliation received from the following two organisations was considered and it is decided to grant affiliation subject to their accepting the terms & conditions for affiliation.
(i)     Indian School of Mines Karmachari Sangh, Dhanbad.
(ii)   Song and Drama Division Employees Associations, New Delhi

11.  National Convention of Central Trade Unions on 6th August 2013.
The available National Secretariat members/leaders at Delhi will attend the convention on 6th.

All office Bearers, State Committees, other C-O-Cs and Affiliated Unions/ Associations/Federations are requested to implement the above mentioned decisions of the National Secretariat meeting, WITHOUT FAIL.

This may be treated as most urgent/important,

In pursuance of the orders  contained in  Chief  Postmaster  General,   AP  Circle,  Hyderabad vide Memo  No:  ST/6-1 (P)/ NBLSG/2013  dated  17.07.2013, the following Postal Assistants as mentioned against their names on promotion to the cadre of Norm Based LSG (Postal) in the pay band of Rs.5200-20200 with grade pay of Rs.2800/- are allotted  to  the  Divisions  by the Competent authority,  with immediate effect and until further orders: